Hi, welcome to the blog page. Like everything thing, this is sort of a work in progress. Here is where I’ll begin sharing a few favorite moments from photoshoots (like this), a few pieces about my process (like this), and a few guides for improving your experience during your own portrait sessions. 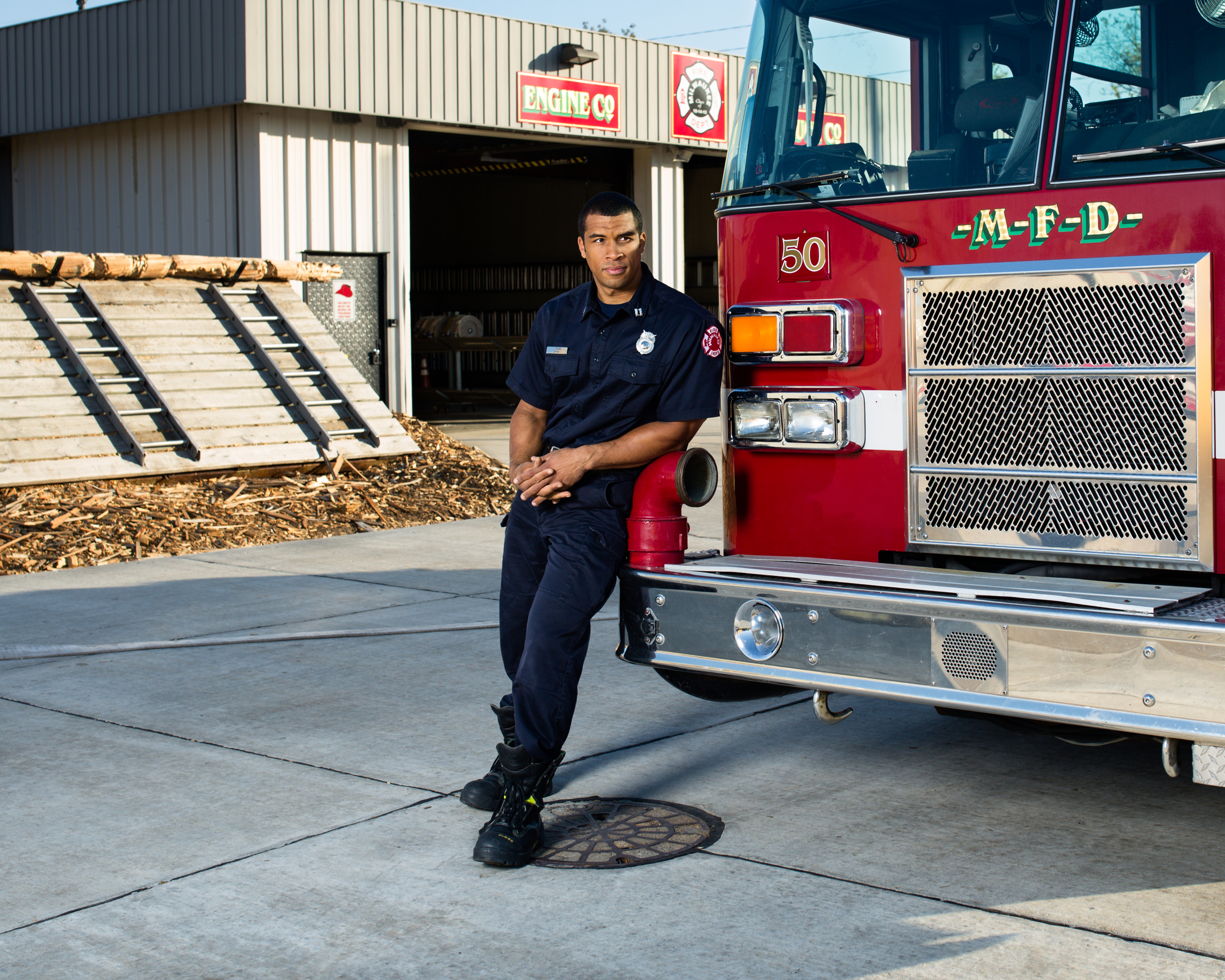 At first glance Captain Jordan Ponder is an intimidating dude. Big firefighter who is legitimately a body builder in his free time. Massive muscles and steely glance aside, Jordan is, without a doubt, one of the nicest people you will ever meet. 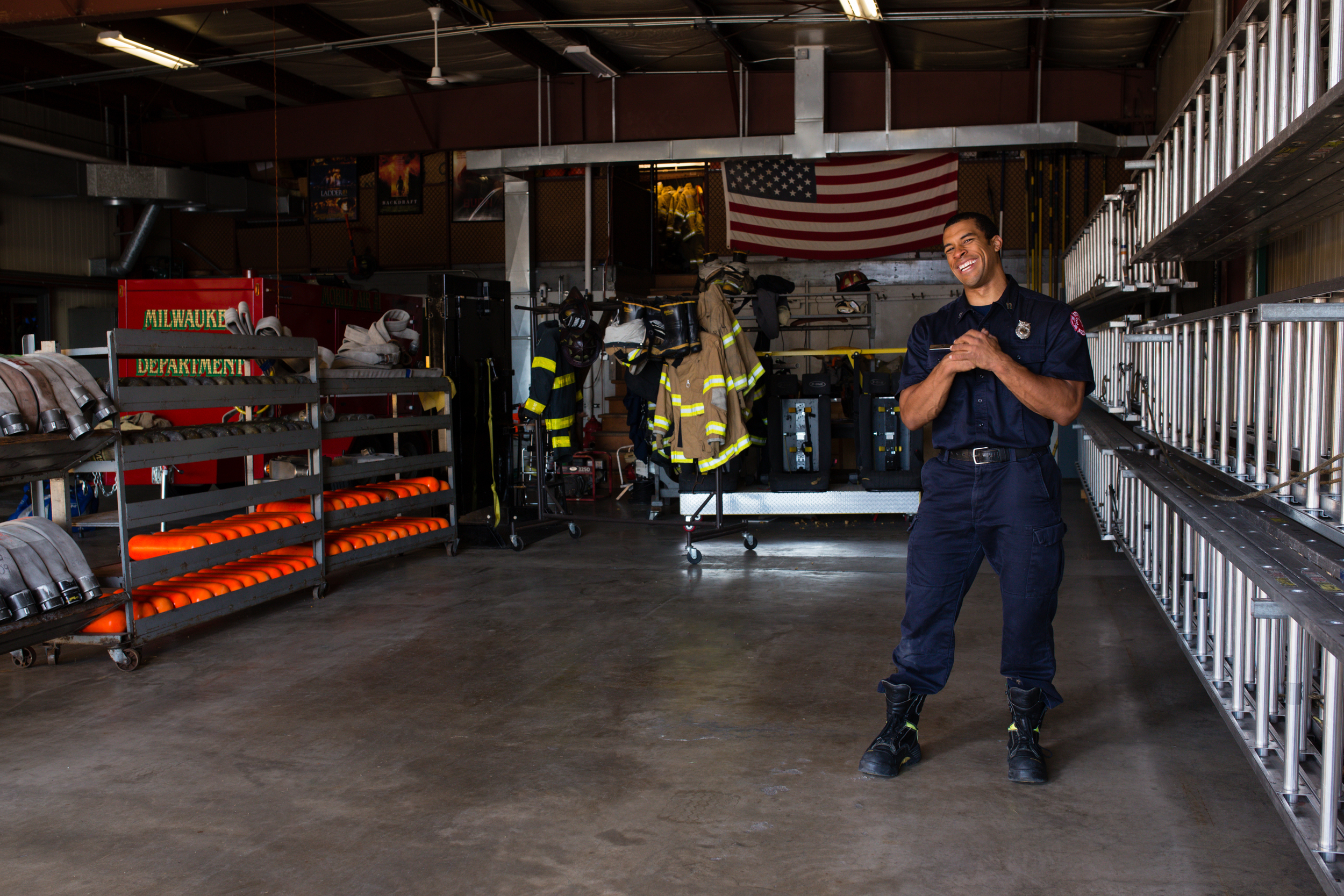 I met Jordan through local trainer Kellen Millad.  We got a cup of coffee and I instantly knew that this was a guy I would want to be friends with.  He truly has a kind heart and soul, is extremely involved in his community, plays drums in his church's band (go musicians!) and is driven to always improve.  He said to me that it's not about being better than everyone else, but rather being better than you were the last time you did something.  (I even trained next to him once at CoMo. My competitive nature got the best of me, and I was pretty sore for a few days from my attempts to keep up.) 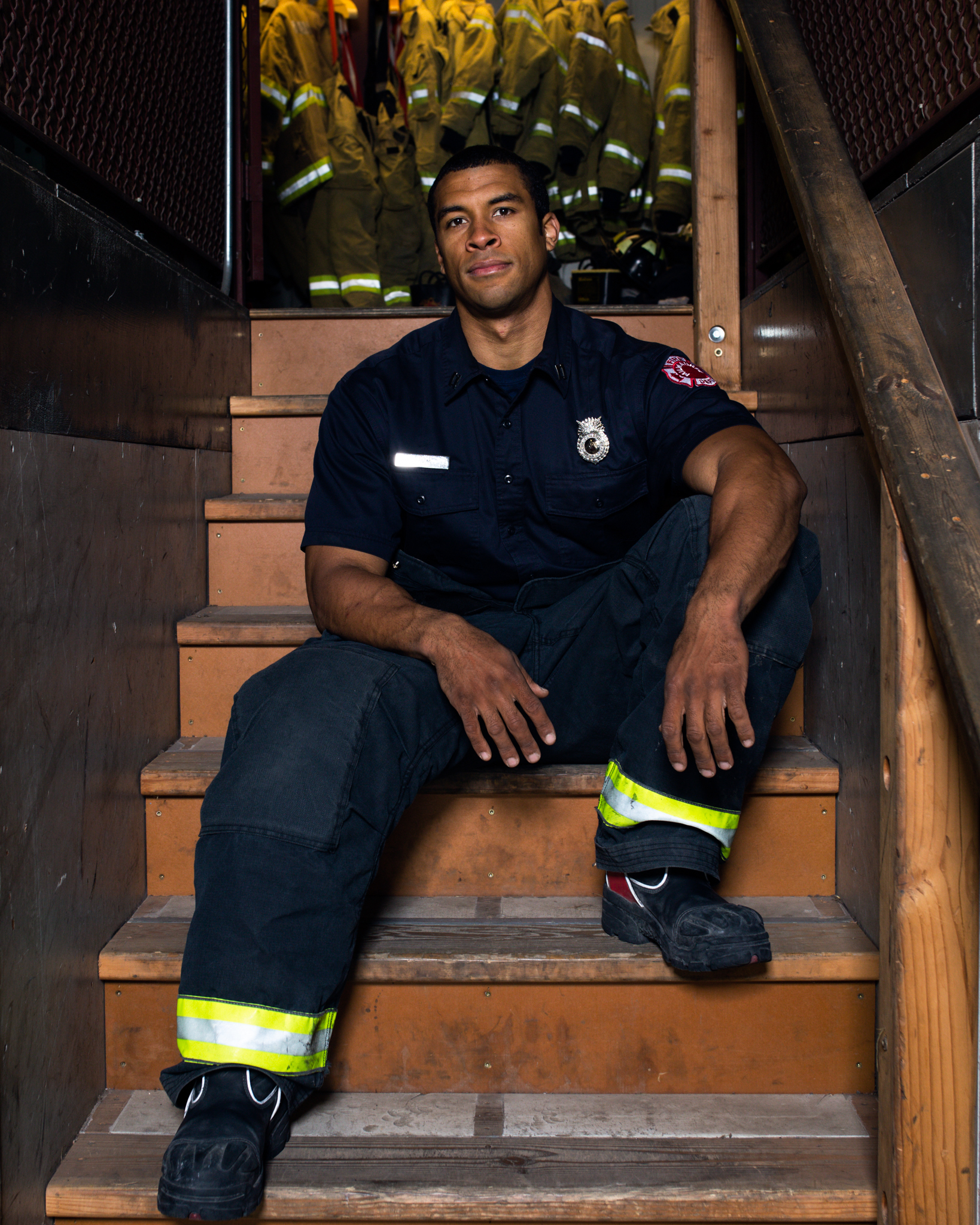 Jordan is a born and raised Milwaukee native with deep roots in city pride, faith and family.  He is the son of a 26 year veteran of the Milwaukee Police Department, so it's no surprise that he followed in his father's footsteps to serve the city that he loves.  Jordan's parents were very supportive of his body building, encouraging him to begin training at a young age to compete in his first meet at 17.

Jordan became a Milwaukee firefighter right after high school, and his passion for fitness and public service combined when he was approached to take on the lead fitness trainer roll for MFD.  Even though a volunteer position at first, Jordan eagerly took the opportunity as a way to give back to his brothers.  As a trainer he focuses on safety, energy conservation and overall health. 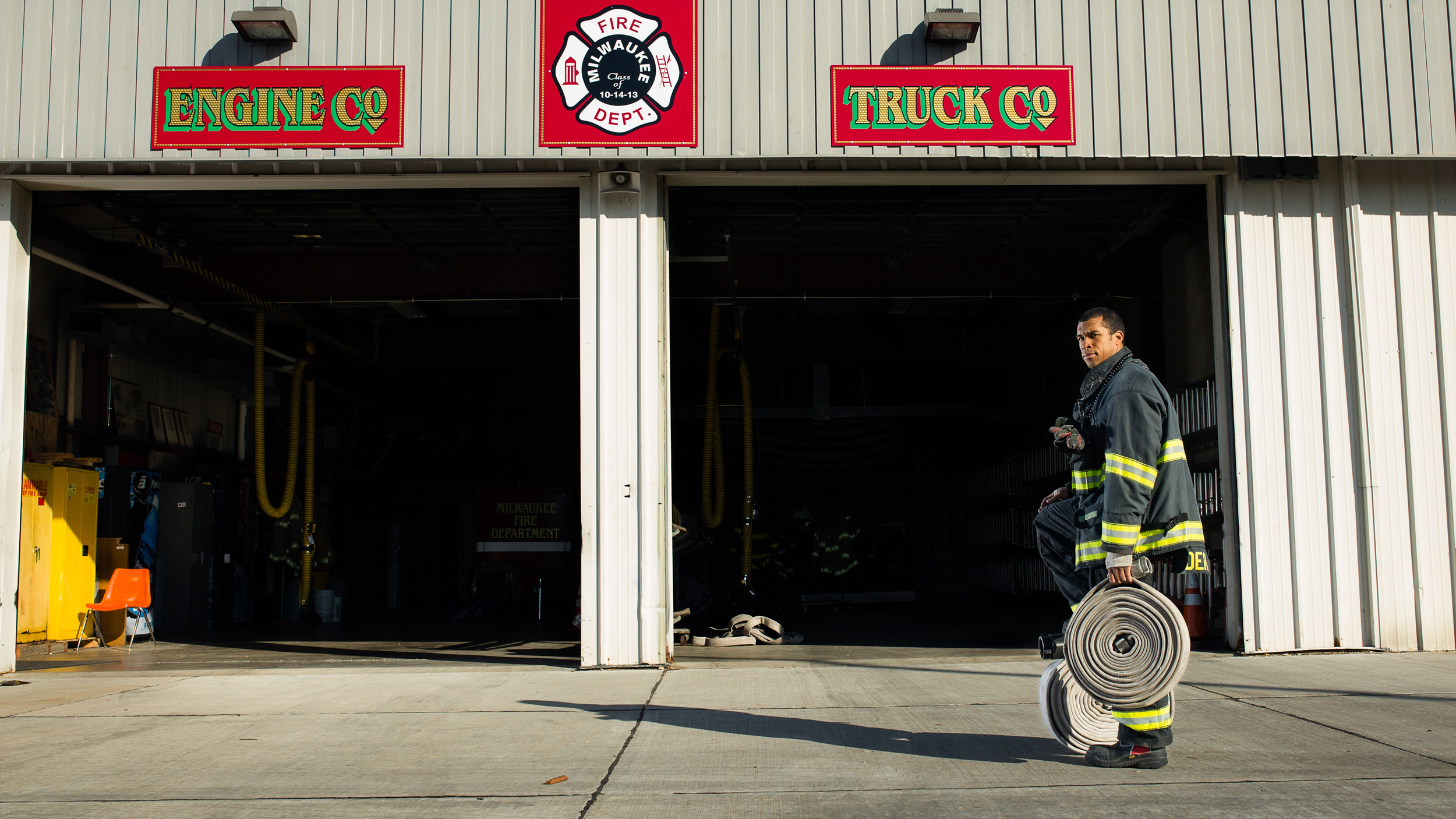 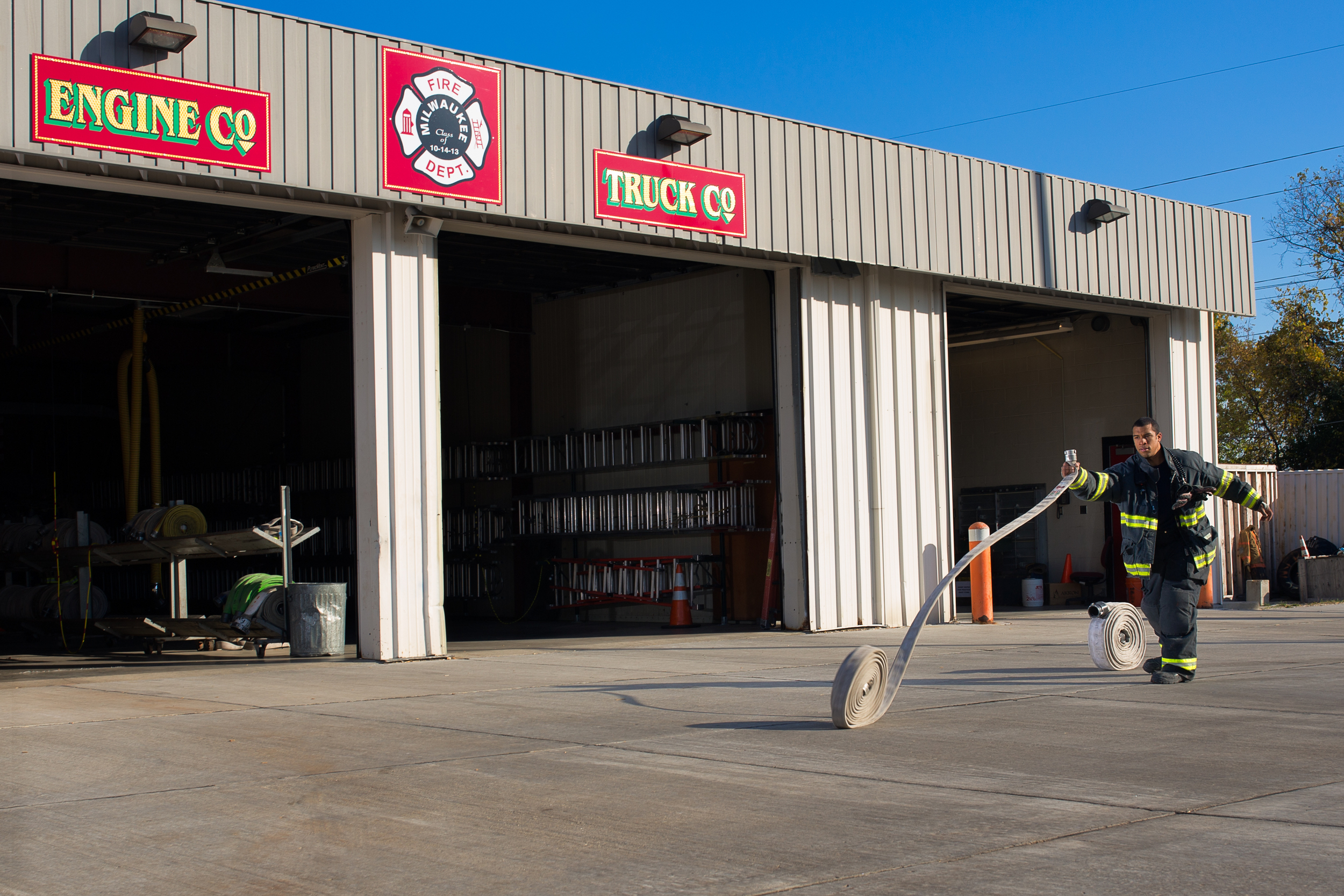 When he’s not at the gym or fighting fires he is still working. As the Director of Firefighter Dynamic Performance Training and contributing writer for Fire-Rescue Magazine, Jordan continues his dedication to improving the health and safety of his brothers and sisters at departments in Milwaukee and nation wide. 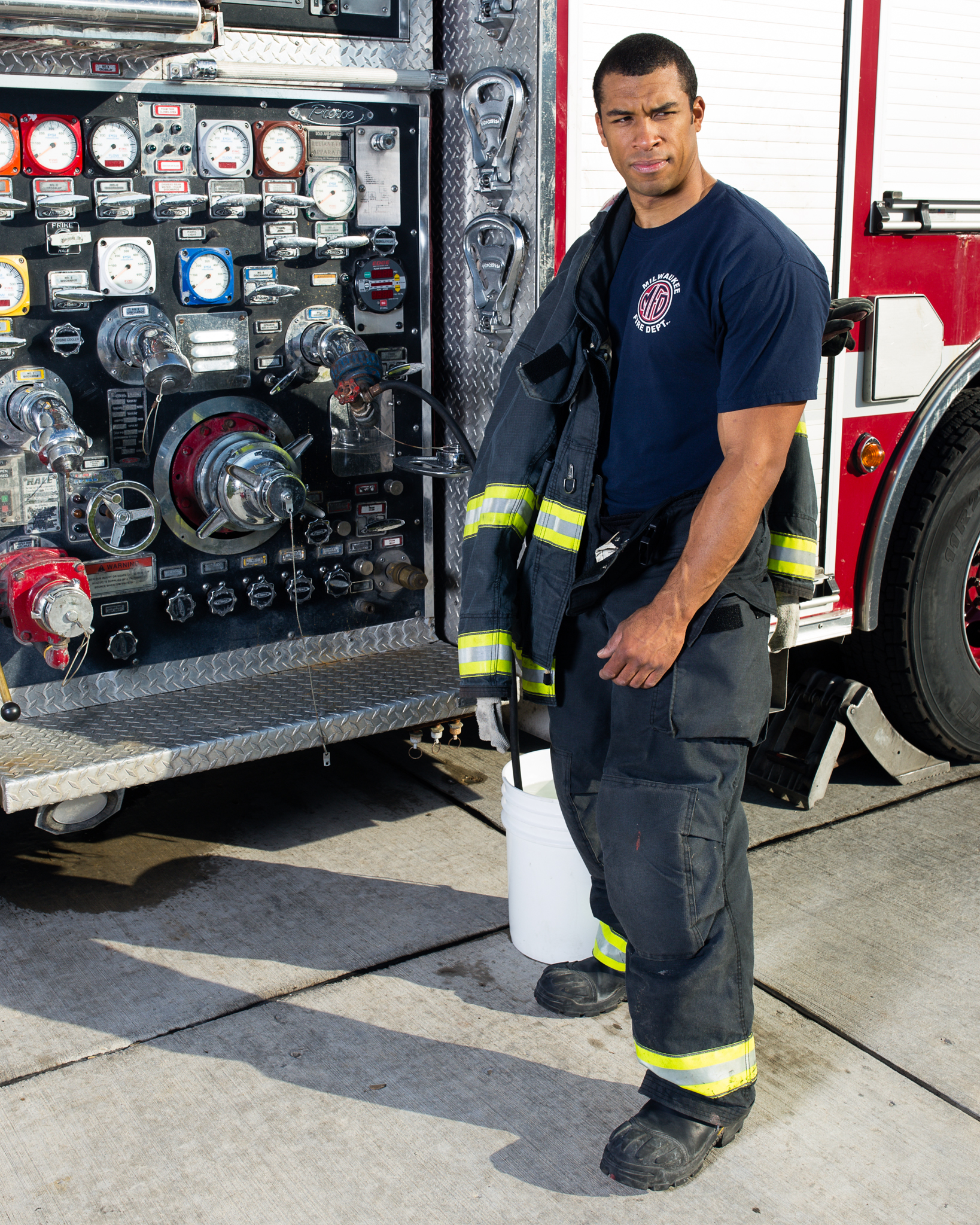 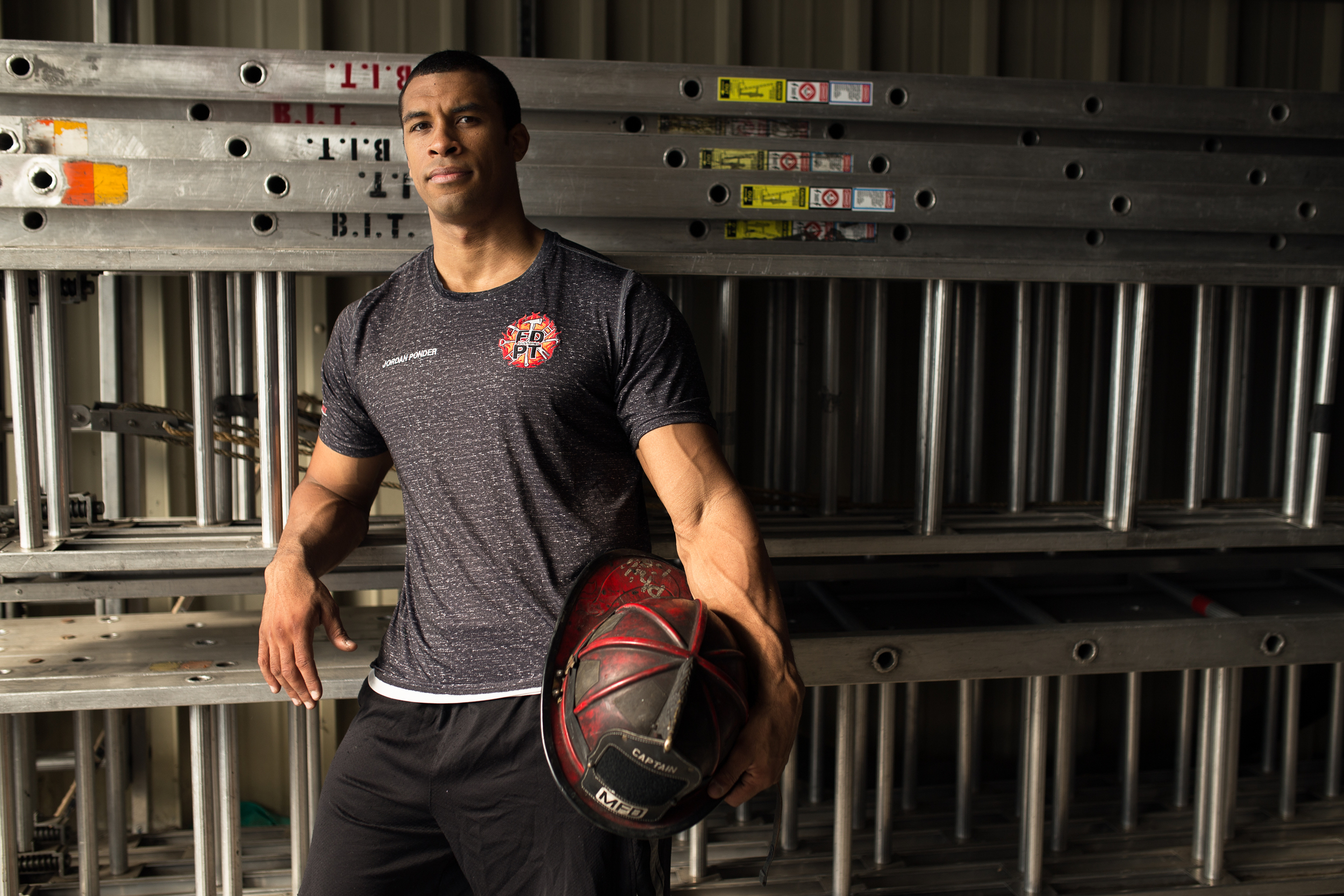 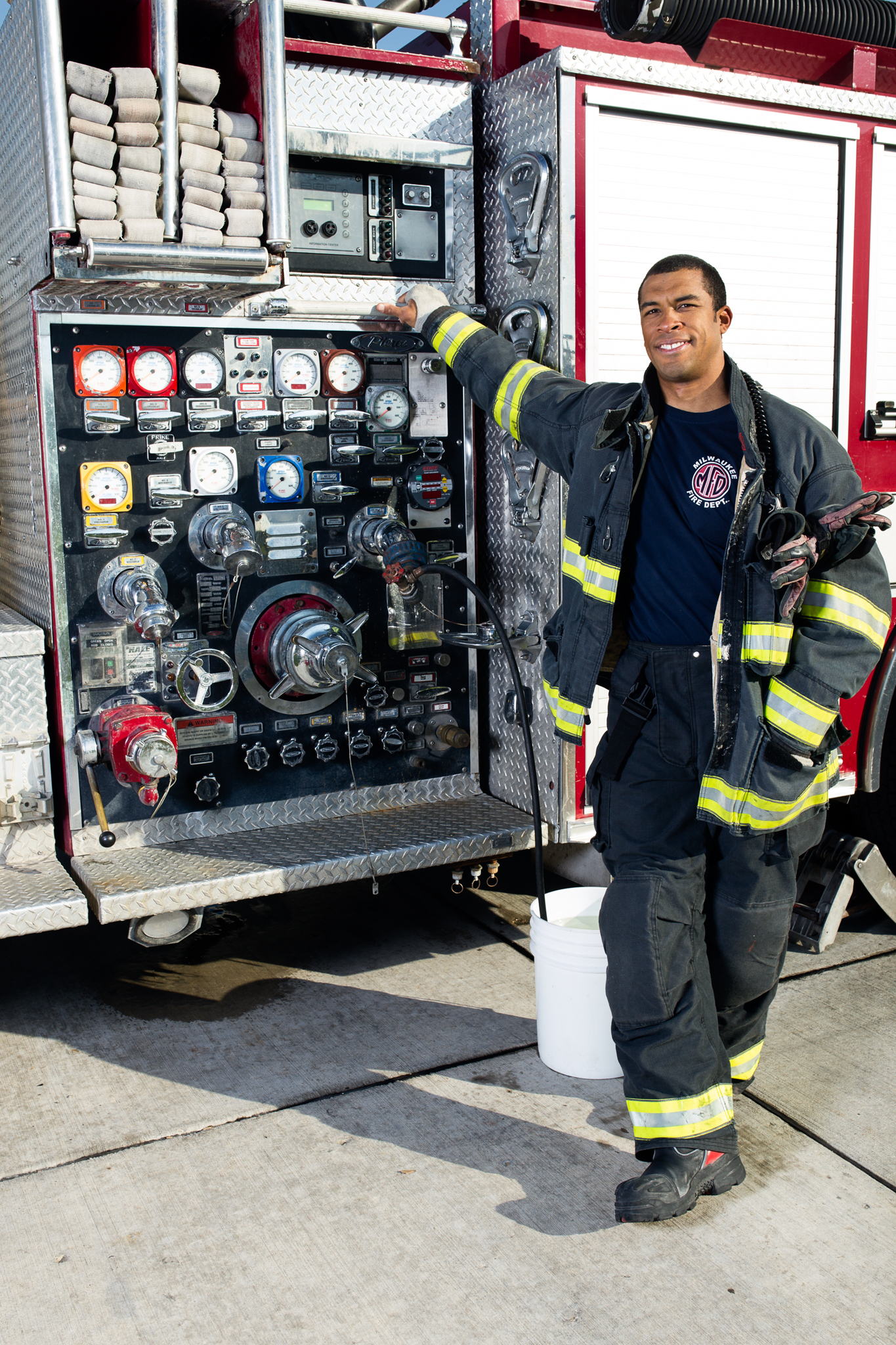 Jordan is a man who lives his life in service - to his city, his family and his community. It truly is an honor to have him not only representing - but also protecting - Milwaukee. 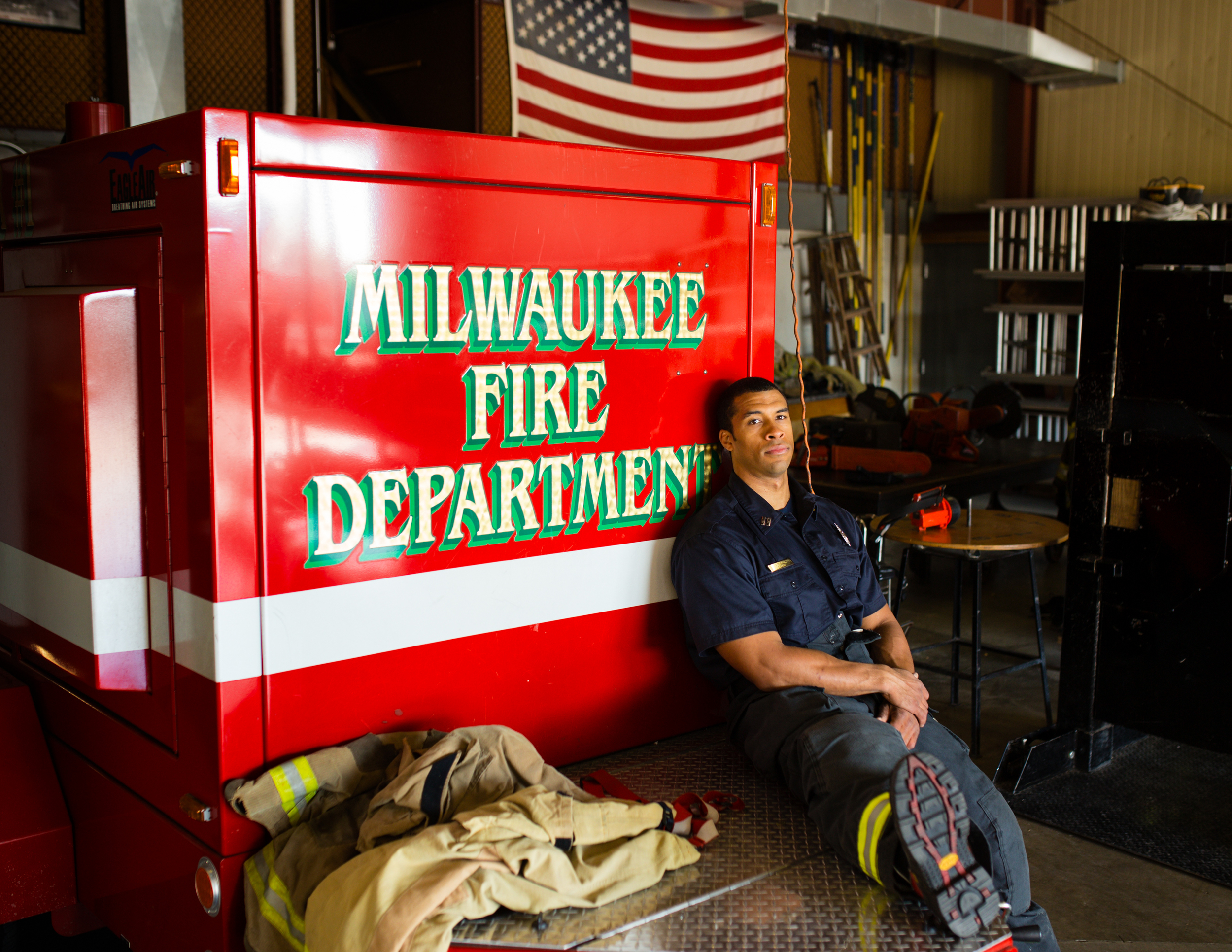 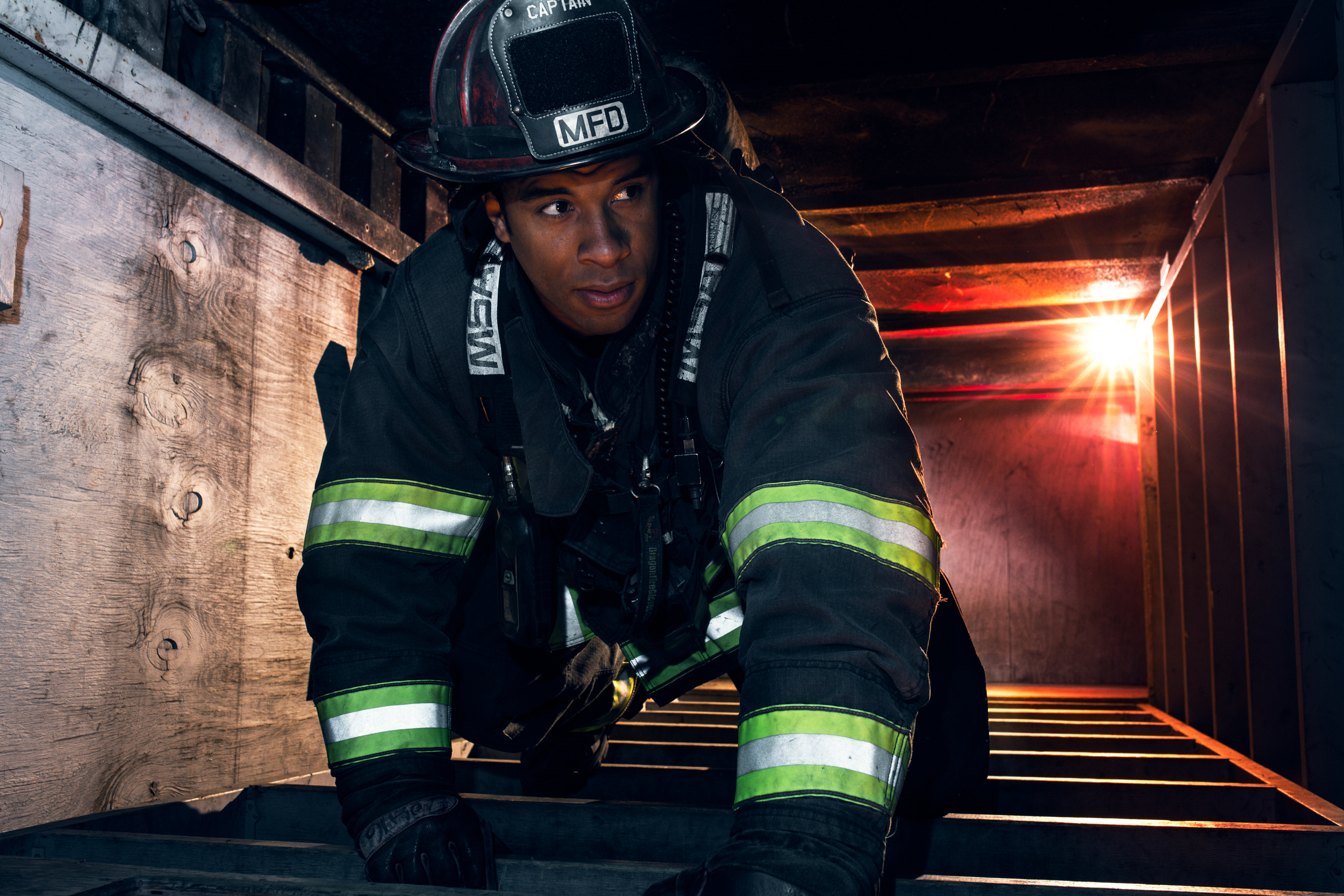 Here’s some #tuesdaymotivation, stare deep into @zachpietrini’s eyes and you tell him why you aren’t going for it with everything you’ve got. New blog post (link in the bio)

I was lucky to have oh so wonderful @hasselhufff in the studio recently. Spent the majority of the session rocking out to @massiveattackofficial and talking about those art degrees we both have (mine in music, her’s in visual from @miadcollege). If you are not already familiar with her music, get out from the rock you live under and experience the wonder that she brings to the stage.

Very late to the party, but spent the day combing through a bunch of my favorite projects of 2019. Pictured here is 16y/o Milwaukee rapper @kingswyft. I photograph him and a handful of other young talented local artists for @milwaukeepublib MPL Loud series, where the city’s library hosted a hip hop concert right in the middle of the stacks of books.

Intensions often start by putting something out there. The image you want to portray, the style you want to show, the genre you want to exist in, the career path you are trying to follow, and goals you want to reach..... hell, the photos I’ve got stashed on my hard drives.... if we keep them to ourselves they don’t do any of us any good. Shot of @louiscucunato, crazy talented musician and composer. After our session we got coffee and talked about intentions and goals. 2020 is just getting started.

Find something you love and you’ll never work a day in your life. There is joy and pride in any career, and for me documenting that is truly one of the greatest gifts in my work. Select from a project for @mkedowntown with @waterstreetcreative.

Recent shot from a session for @ashmilwaukee at @theironhorsehotel.... if you are in the MKE area and looking for a great steak, the grilled short rib for 2 is 🔥 and the bartenders are 💣 🥃🍸

Hey y’all, Milwaukee’s own @odeosbourne will be entering the octagon tonight. Rumor has it @boonemilwaukee will be showing the @ufc fights tonight too! Throwback shot from a session I did with him just before his #ufccontenderseries debut. Beside being a top fighter, Ode is without a doubt one of the most humble and community focused guys you’ll meet.